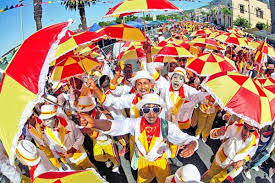 The Cape Minstrels (also known as the Kaapse Klopse) take over the streets of the Mother City each year for the annual and historic Second New Year Street Parade, a colourful procession also known as Tweede Nuwe Jaar. While the musical celebration usually takes place on 2 January, the event was postponed due to logistics and holy days and the march is now confirmed to happened on Saturday, 17 January 2015.

The parade will come to a halt at Castle and Rose Streets.

Each year, the City of Cape Town partners with the various minstrel groups to put on a dazzling show for Capetonians and tourists alike – more than 13, 000 minstrels in over 70 troupes parade throughout the city centre in their colourful garb.