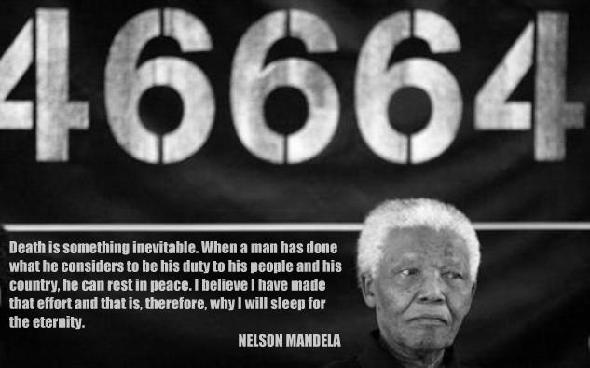 A nation in tears! The world is mourning! Today we lost a great man, a Father to our nation.

Nelson Mandela was born Rolihlahla Mandela on July 18, 1918, in the tiny village of Mvezo, on the banks of the Mbashe River in Transkei, South Africa. “Rolihlahla” in the Xhosa language literally means “pulling the branch of a tree,” but more commonly translates as “troublemaker.”

He fought his whole life against Apartheid , that is to say a system of racial segregation from 1948 to 1994 in South Africa.He vehemently opposed racism, poverty, inequalities and and wanted nothing less than racial reconciliation. This unlimited determination brought him many problems during his life. In 1944, he joined the African National Congress (ANC. He helped to form the ANC Youth League in order to develop a mass-based policy and the Programme of Action. In 1952 he was designated to be the national chief of the defiance campaign. It was a campaign of civil disobedience launched by the ANC and the South African Indian Congress against 6 unjust laws .He and 19 others were charged under the Suppression of Communism Act for their part in the campaign and sentenced to nine months of hard labour.

On 21 March 1960 the country declared the first state of emergency with the slaughter of 69 unarmed people who were against the pass laws and the the banning of the ANC. Meanwhile Nelson Mandela was detained after a countrywide police swoop of 156 activists in 1955, which led to the 1956 Treason Trial. The Treason trial only ended when the last 28 accused, including Nelson Mandela were acquitted on 1961.As soon as he and his colleagues were acquitted in the Treason Trial Nelson Mandela began planning a national strike for 29,30 and 31 March , but the strike couldn’t occur because of a massive mobilization of state security.

On 1962 he used the name David Motsamayi and left South Africa secretly. He travelled around Africa and in England to rally people behind his cause. He finally received help with the training of military in Morocco and Ethiopia and he was arrested on July 1962 when he returned to South Africa. He was accused of leaving the country unlawfully and encouraging workers to protest. He was convicted and sentenced to five years imprisonment which he began serving in Pretoria local prison.

In October 1963 Mandela was convicted for sabotage in a well-known trial: The Rivona Trial. On 20 April 1964 while he was in the docks, he made a famous speech to the court: “I have fought against white domination, and I have fought against black domination. I have cherished the ideal of a democratic and free society in which all persons live together in harmony and with equal opportunities. It is an ideal which I hope to live for and to achieve. But if needs be, it is an ideal for which I am prepared to die“. On 11 June 1964 he was finally sentenced to life imprisonment and was sent to Robben Island. He spent 27 years in jail. On February 1990 after having recovered from Tuberculosis and having spent 2 years in a house at Victoria Prison he was finally released, nine days after the unbanning of the ANC even though during his imprisonment he had several conditional offers of release. So he continued his political fight and was elected at the head of the ANC in 1991. In 1993 he and the president at that time, De Klerk, jointly won the Nobel Price, in 1994 at the age of 71years old he was elected South Africa’s first black President. Nelson Mandela just did one mandate as president and he continued his fights through his foundations.

So, throughout his life and his fight we have seen devotion of a man, a man who fought for his country and the rights for his people! He was and always be one of the best living examples of virtue. He was an inspiration and a role model to all who are oppressed and deprived, to all who don’t live in democratic countries and who want freedom. He was the beacon to all those all over the world who struggle against racism, poverty and inequality.

After a long illness we wish our Father farewell.

May his soul rest in eternal peace!