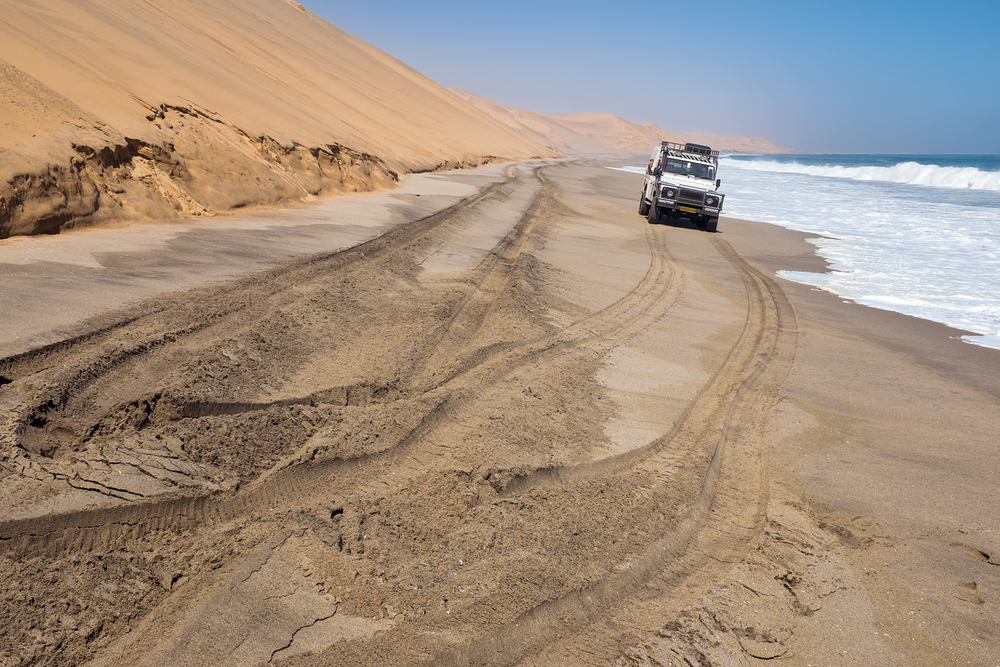 If you’ve ever had to endure the underground commute in London, or any other country for that matter, you’ll understand the pain. Wedged somewhere between the humming armpit of the balding fifty-something and the woman desperately trying to claim every possible millimetre she can to be away from you; you find yourself resuming a posture worthy of a contortionist as the piping hot coffee you stupidly brought with you is splashing painfully down your leg. This can go on for up to an hour, all the while no one wants to look you in the eye.

So imagine escaping from this to completely the opposite. Friendly, sparsely populated, and above all vast, Namibia is one of those wonderful, underrated and unpublicised countries that is clean, efficient, safe and has myriad different places crying out to be explored. The word ‘Namib’ itself means vast, and Namibia therefore the land of vast, or better still the land of open spaces. So prepare yourself for a bit of self-discovery, a great deal of relaxation but above all a healthy dose of adventure. Go alone, take some friends, the girlfriend, the family, whatever; but to get the most out of the country prepare to try something a little different.

For those driving enthusiasts out there the Namibian roads are superb, a set of tarmac roads connecting Windhoek to the coast at Swakopmund and Walvis Bay, and from there on into the desert the via rally style gravel roads and dirt tracks. For those who just want to be fondly reminded of that time your ex demanded you sat through Out of Africa, or the very first time you watched the Lion King, the African savannahs on offer are utterly breathtaking. Either way the best (and cheapest) way to experience Namibia’s excellent infrastructure and awe-inspiring landscapes is via a self-drive tour.

A 4×4 costs around £100 per day so unless you’re feeling particularly decadent, it is best split through a group of travellers, your family or friends. There are places that can sort out your accommodation ahead of time and book in advance, so once you have had the pleasure of choosing your vehicle and sorted your itinerary it’s time to get going. Regardless you will save hundreds on the luxury of a pre-destined tour and have the flexibility to do and move as you want. Providing you don’t speed, particularly on the gravel roads as cars can flip, and providing you don’t venture miles off road on your own in the middle of the desert you will be perfectly safe. Just don’t hang around a riverbed in the middle of a flash flood!

Windhoek, Namibia’s capital and where you will most likely set off, really is not worth hanging around in for long. There are plenty of places to get a good crocodile steak or stock up on some Kudu biltong for the drive, but unless you’re after a good shopping mall its’ not the most exciting of places. Organised and efficient as its German colonisation would lead you to believe, and as African cities go pretty clean and well organised, it’s not as unusual or intriguing as the coastal town of Swakopmund – a mini Germany in the desert and the first stop on a self drive tour.

Fans of the late Patrick McGoohan may be interested to know that the town was taken over for AMC/ITV’s remake of the Prisoner (remember that anyone?), and quite rightly so as a town that appears so wonderfully isolated from the rest of the world. The town is quite eerie, every house nearly identical, each exuding German efficiency either side of the sandy roads. Just be careful to arrive before 5pm, when the town is actually busy or else the place will remind you of the Hills Have Eyes and you’ll be keeping your eyes out for mutants and ears out for nuclear test alarms.

There’s plenty to do here, from enjoying some fine cuisine by the pier to sand-boarding in the desert that just happens to be right next door when you roll out of bed in the morning. If you’re feeling adventurous then you can go skydiving with some rather hyperactive Eastern Europeans who will laugh mercilessly at you while you wet your pants with fear, flying up 10,000ft in a plane the size of a cardboard box only to throw yourself out of it to a burst of turrets and the most spectacular view of the Namib desert.

Once you’ve had enough of this picturesque little town, its time to hit the road and prepare yourself for one of the most stunning drives you’re ever likely to undertake. Stop off briefly at Walvis Bay to see the tens of thousands of flamingos and pelicans flocking to the bays south of the town, before heading down the C14 and into the desert. The tarmac gradually gives way to gravel roads, as you drive through what seems to be an endless desert wasteland, horizon after horizon coming and going as you start to become entranced. Slowly but surely colours start to appear in the desolate landscape, greys become browns, browns slowly turn to yellows, greens, oranges; all the while mountains starting to pepper themselves out into the distance.

The gravel tracks start to get coarser and the 4×4 starts to hum, clearly content in doing what it was made for. The vastness of the landscape starts to become overwhelming; terrain stretching off miles into the distance for as far as the eye can see, a true sense of the grandness of nature imbuing your very being. Best of all, bar the odd car noisily going past, for extended periods of time the landscape feels as though its entirely your own.

After seemingly hours of endless and stunning African savannahs, curling and weaving up and down through the mountain ranges at Kuiseb and Gaub,, still breathless with the views you’ll arrive at a lodge near Sesreim. A few small shacks, and a slightly larger central hut containing a restaurant and bar is a typical setup for a desert lodge, sitting quietly in the middle of one of the stunning savannahs. Most likely you’ll be sharing with some package tourists, paying through the nose for what you can do for the cost of the petrol. The shacks are great – a wonderfully comfortable bed in the starlight of an African landscape.

The night sky is stunning, dotted with thousands of stars, the milky way, and just about every constellation you know how to recognise (okay orion and if you’re really on the ball the big dipper). You’ll probably see one or two shooting stars if you’re lucky as you tuck in with the loved one / partner / nearest and dearest at your side.

The next morning arrives and its time to visit the phenomenal sand dunes at Sossusvlei. The Namib-Naukluft national park is one of the most stunningly unique and beautiful landscapes in the world. The park is larger than Switzerland, and at the Sesreim entrance contains a rustic and ancient looking landscape combining vast clay pans surrounded by towering sand dunes. The dunes themselves are a deep moody orange in colour, developed from the oxidization of the iron in the sand, testimony to the phenomenal age of the desert.

Driving through the massive clay pans (and do be careful not to come here during a flash flood!) you may see gemsboks, hyenas, jackals and other animal riff-raff wandering lost through the planes. Look up and perhaps you might see a hot air balloon, a stunning way to experience the oldest desert in the world. The landscape is staggering and you won’t want the drive to end. When you finally reach Sossusvlei, its time to use your 4×4 for what it was really meant for and take it out to the dunes, slowly driving over open terrain on the white sands that lead to the location of the highest sand dunes in the world. You can then walk up the dunes without a horde of tourists in tow and experience the wonderful serenity of the desert for yourself from the top.

So now, liberated from the freedom and the vast expanse of the country, the world is your oyster. Drive to Etosha to see rhinos, lions, leopards and elephants; find the ghost town at Luderitz; raid the diamond mines on the Skeleton coast – you’re free to do what you want. Take a week, a month, six months; just kick back, relax and enjoy the open road. And when your time is up, and you’re back being crushed in the Jubilee line rush hour while the heady expanse of all that freedom, space and liberty is starting to become a faded memory; just breathe deeply, shut your eyes and think back to that stunning African expanse and escape in that moment once more to the beautiful savannahs of the land of open spaces.