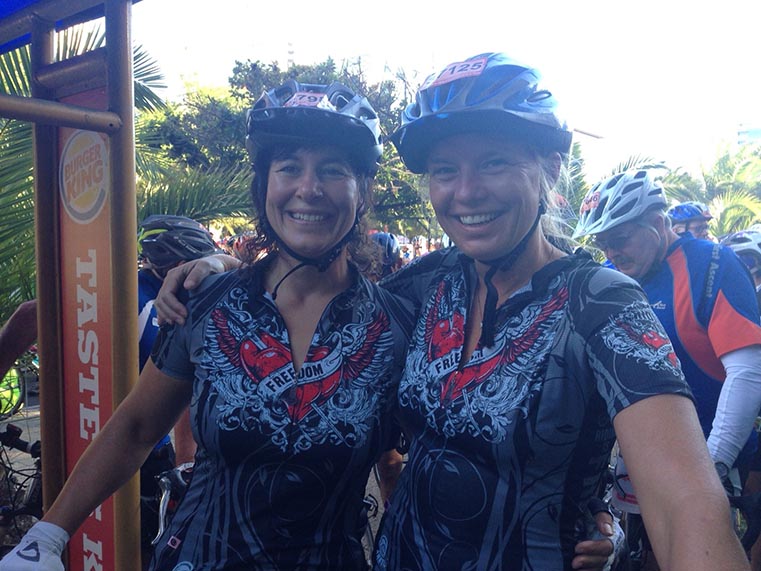 My Danish friend, Sanne, slept over and our morning started at 06:30. We enjoyed a simple breakfast of bananas and yoghurt before cycling to the city from Tamboerskloof, where nearly 35 000 people gathered for the Cape Argus. It was incredibly well organised – all the cyclists were directed into different loading bays – I imagine that that is what gigantic herds of cows feel like at the instruction of their shepherds… There were public bathrooms everywhere and even a coffee trailer – despite there being so many people present, the queues were not too bad.

We were separated from Geoff right in the beginning. We started the tour at 08:15 and he was doing the Argus for the first time, so our time was about 10 minutes better. Many cyclists were in fancy dress: as cows or Rhinos, a princess with six knights and a dragon and some participants even competed using unicycles!! That was really crazy. The funniest tandem tour participants was a newlywed couple in wedding clothes and a Reggae team playing very loud music. Before I knew it, it was the starting shot for our QQ group and with a huge shout from our group the race began!

Right away a wind gust nearly blew us clean off our bikes and under the bridge, as the force of the wind funnelled through at something close to 80km/h. What a way to start. The Cape Doctor (the name of the wind) was blowing at about60km/h, but some gusts were twice as strong. The first 35 km along the M3 hit us hard as we pedalled directly into the wind! With this race, we have to stick behind another rider and peddle in their slipstream – only a 10 centimetre distance between each cyclist is allowed. Don’t look up or swerve. The whole time you need to just focus on the wheel in front of you. You can’t move out of the line or someone will shout – or worse – crash into you.

Our first stop was in Simonstown, before the infamous Smitswinkels hill. This is the only time I ever have a Coke, the instant energy from those tons of sugar is needed. Next, peddling uphill along a steep slope into the wind was brutal, but luckily the route levelled out and we had it in the bag. From there it was a smooth ride to our hometown of Scarborough. We had friends to cheer us on – which really helped – and   stopping for quick hugs gave us that resurgence is perseverance we all needed!

We then continued flat out towards Sunvalley where our second stop was located, just before the dreaded Chapman’s Peak. The mountain seemed to go on forever and the worst part of this leg is that you can see thousands of cyclists ahead of you snaking up the hill… and it looked daunting. By now my muscles and knees are hurting horribly. Sanne is quite an experienced, ruthless rider andshe peddled hard – I was just tried to keep up with her. I really did not want to lose her and cycle alone. Not only was the circuit itself tough, but there was always a fellow competitor nearly knocking into you, and at every corner turn the wind practically blew you off balance. Wind gusts were fast and violent, but we made it to the last leg of tour which took us to the top of Chapman’s Peak followed by the downhill run into Hout Bay.

Just when you start to relax and enjoy the scenery, the dreaded last climb is right there! The toughest part of it all and the final stretch: 1.2km of relentless hill, the steepest of all, Suikerbossie! By now everything hurts, my neck, back, butt and my knees. I no longer know which is worse. We try and psyche each other on as much as we can, and there is no more talking, looking or thinking, just peddling. It is getting hot and I can’t help but entertain visions of water and swimming. Sanne pushes me to keep up with her on the last hill and…Finally, finally! – The course goes downhill. With strength I did not know I had in me, we sprinted past Camps Bay and Sea Point for the last 10kms. It felt endless. I could not sit on my bum anymore and had to stand most of the way!

Then we saw the sign saying we had four more metres to go. By now we are so desperate to see the 2km signage, but there was none.

No more cycling for me ever again though, haha.

And we beat last years’ time by five minutes J. It felt as if we were faster than the wind!

Geoff’s time was almost the same as ours but because he started later, he arrived at the finish line later. Unfortunately, we did not see him from the beginning of the race to the end. We thought that he would catch up with us but Sanne’s pace was really intense. He met his former business partner on the way, so he had a bit company too. He saw some hectic accidents along the way, and I am incredibly thankful that we were spared.