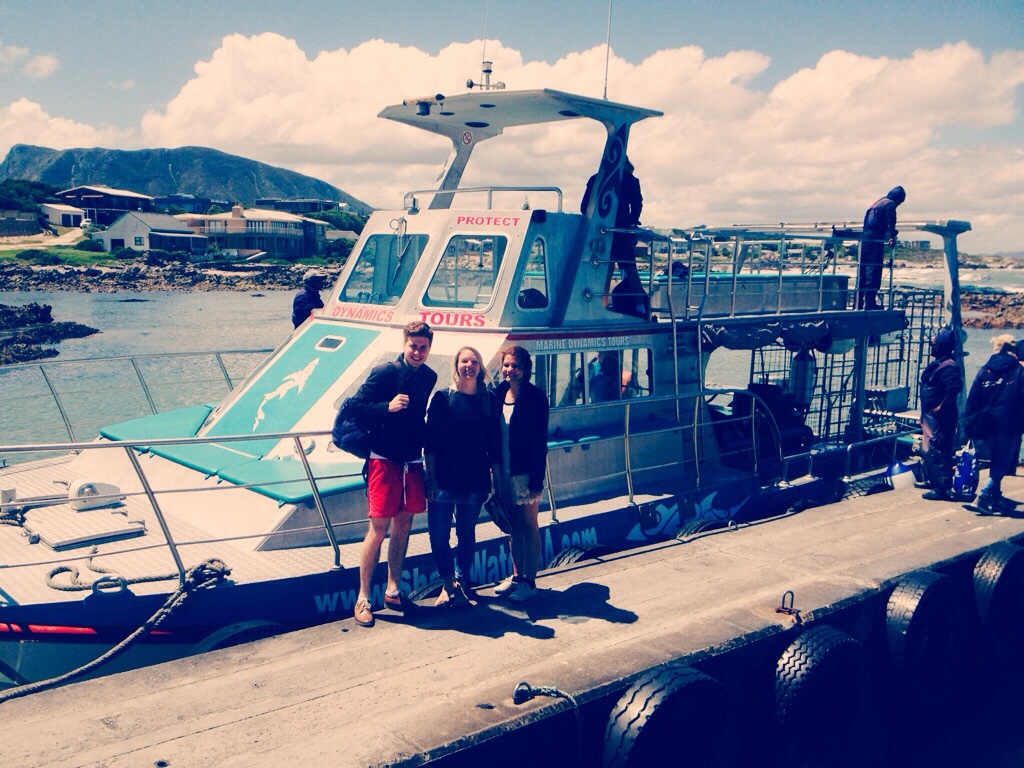 ARE YOU BRAVE ENOUGH? Get an adrenaline rush at the SHARK CAGE DIVING!

After thinking about it quite long (one of us more, the others less), we, Julia, Kathi and Jonas, finally dared to go to Kleinbaai and be ready to see the big white of the ocean.

We skipped partying the night before, because we had to get up very early to start our tip. So it was 5 (!!) in the morning, when we got in the car. We booked the Shark Cage Diving Experience at Marine Dynamics and they start their tours in Kleinbaai at the Great White Shark House.  After about 2 and a half hours we finally arrived and were welcomed with a really nice breakfast (BEWARE: you may throw up all of it on the boat later).

So after a short instruction, we quickly got on the boat and took our way out to the open water. The drive was really fun but after we stopped moving, a lot of people got seasick very bad.

Nevertheless everybody wanted to go down in the cage and see the white sharks in their natural area. They put eight people in one cage and then the crew began to bait the sharks with a stinky kind of soup. The tree of us were put in the third cage and it was a really great experience. The first two minutes we already saw one white shark passing our cage! And two more to come! Unfortunately the visibility under the water was not so great this morning, but as the sharks were passing us very close, we could see them anyway. Sharks are beautiful creatures and not scary at all (at least in this situation). After and before being in the cage, you could observe the sharks from above the water, which is also very exciting.

Unfortunately the people in the last cage, did not get the chance to see a white shark, because none appeared anymore. A great pity, but you can’t control the ocean and the creatures living there and that’s actually a good thing.

All three of us had a great time and don’t regret to grab this once in a lifetime experience to see a white shark.

Finally done a thing to check it on the bucket list!

Tip: if you get there with a car, don’t miss to check out the beautiful coast of Hermanus – we discovered some flamingos close to grotto beach!  If you don’t have car for this trip, AROUND ABOUT CARS can help!