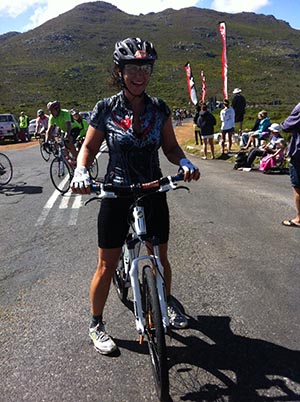 The Cape Town Cycle Tour is the world’s largest individually timed cycling event. Starting on Sunday, 8 March 2015 there will be attending 35 000 cyclists from all over the world.

The route is 109 km long will start in Hertzog Boulevard at the Cape Town Civic Centre. The route will take you onto the N2 Eastern Boulevard and down the M3. After the end of M3 you will pass St. James Station, Simon’s Town, Muizenberg, Fish Hoek and Miller’s Point. Going on, you will drive past Scarborough, Noordhoek and Chapman’s Peak. Now you are almost there – just go past Hout Bay, Suikerbossie, Camps Bay and finally end up at the Cape Town Stadium in Green Point. See below for the detailed route:

The capacity is set at 35 000 cyclists, so you better be quick if you want to join the race. Registration for the 2015 Cape Town Cycle Tour will take place at the annual Cape Town Lifecycle Expo at the Good Hope Centre in the week before the race. Entry fees will be R340 per person for Africans and R730 for people from other countries.

For those who come to Cape Town from abroad: you can hire a car which fits your bicycle at AROUND ABOUT CARS to go to the city from the airport. As there are always a lot of demands for this time period, be sure to book early. If you are a local and want to go there by car or go by car around the area be careful, because there will be several road blocks around the route. The detailed blocks will be announced on Cape Town Cycle Tour’s website.